They look different when used, and they have a completely different application.

The first task is an automatically scheduled task. The first indicator that it’s an auto task is the icon in the Task Mode column, circled below in green. Also, you’ll notice the Gantt bar is blue with straight edges.

Task 2 in the image below has only had its duration entered. You’ll notice that the Start and Finish date fields are blank, and the Gantt bar has faded left and right edges.

In Task 3 the Start and Finish dates were entered. Project calculated the duration as 5 days, and put capped ends to the left and right edges of the Gantt bar.

A simpler way to explain it is like this: if you’ve used manually scheduled tasks to create a Project schedule, it’s the same as if you’d created the schedule in Microsoft Excel. You’ll be able to link tasks together, but when you change durations or dates, manually scheduled bars won’t move.

For reasons that no-one’s really sure about, Project 2010, 2013 and 2016 come shipped with manual scheduling set as the default.

We recommend that the first thing Project users should do is to set the default to automatically scheduled. This will mean that all tasks created in a Project file will appear as auto scheduled rather than manual. 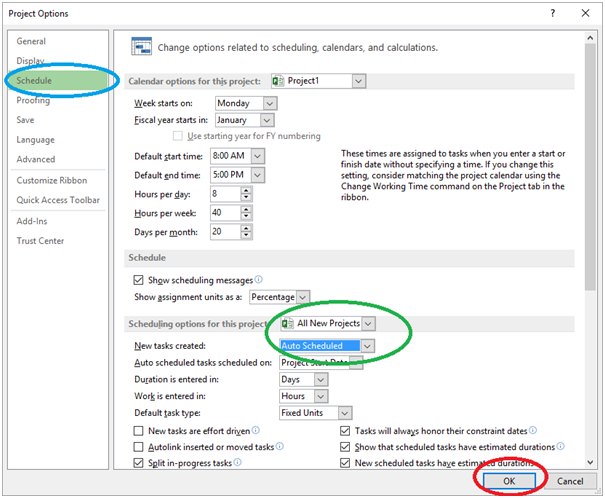 When you create your next blank Microsoft Project file, you’ll see confirmation in the bottom left-hand corner of your Project screen that new tasks will be created in Auto scheduled mode.

In the image below, all tasks have been created as manually scheduled.

If you’ve already created projects where you’ve entered tasks as manually scheduled, they’re easy to change using the steps below.

All tasks will now be automatically scheduled.

Watch out for our upcoming blog on how manually scheduled tasks can be used correctly within your projects.

Ready to get started? Or do you have a question? Send us an email and we'll get back to you, asap.